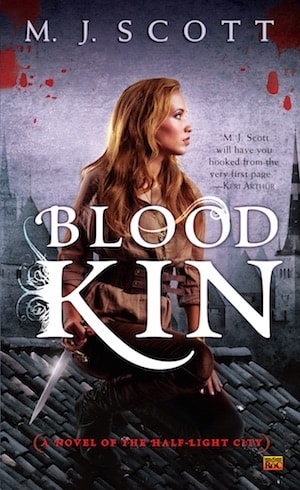 Imagine a city divided. A city where humans and fae magic rest uneasily next to the vampire Blood Lords and the shape-shifting Beast Kind. A city where a fragile peace was brokered by a treaty that set the laws for all four races—a treaty that Holly Evendale has been watching falter day by day.

I didn’t plan on becoming a thief and a spy. But options are limited for the half-breed daughter of a Fae Lord. My father abandoned me but at least I inherited some of his magic, and my skills with charms and glamours mean that few are as good at uncovering secrets others wish to hide. Righ now the city has many secrets. And those who seek them pay so well . . .

I never expected to stumble across a Templar knight in my part of the city. Guy DuCaine is sworn to duty and honor and loyalty—all the values I do not possess. I may have aroused more than his suspicion, but he belongs to the order and the human world. When treachery and violence threaten both our kinds, learning to trust each other might be the only thing that saves us.

But even if a spy and a holy knight can work together, finding the key to peace is never going to be easy . . .

Read an excerpt
Listen to the playlist

“BLOOD KIN was one of those books that I really didn’t want to put down as it hit all of my buttons for an entertaining story. It had the intrigue and danger of a spy novel, intense action scenes, and a romance that evolved organically over the course of the story….Whether this is your first visit to Half-Light City or you’re already a fan, BLOOD KIN expertly weaves the events from SHADOW KIN throughout this sequel in a way that entices new readers without boring old ones. I am really looking forward continuing this enthralling ride in IRON KIN, the next book in the Half-Light City series which will be released in 2013.” Kristina – All Things Urban Fantasy

“Blood Kin had everything I love about Urban Fantasies, kick butt action, fantastic characters, romance that makes the heart beat fast and a plot that was fast paced all the way through. Even more so the villains are meaner, stronger and downright fantastic, I never knew what they were going to do next. You don’t want to miss out on this series!” Seeing Night Reviews

Get all my fantasy news

Sign up to get my newsletter for all the latest news, free reads, giveaways, sneak peeks and other fun stuff.

Thanks for signing up! Please check your email for a confirmation email and click the link to confirm your subscription!